Living Above the Line: Pursuing Christ-Likeness in a Post-Christian Culture 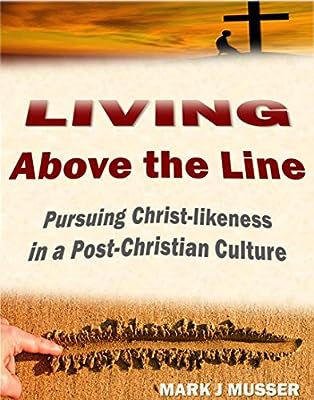 Price:
As of 2020-02-15 07:19:28 CST (more info)
Product prices and availability are accurate as of 2020-02-15 07:19:28 CST and are subject to change. Any price and availability information displayed on http://www.amazon.com/ at the time of purchase will apply to the purchase of this product.
Availability: Not Available - stock arriving soon
Product Information (more info)
0 0
CERTAIN CONTENT THAT APPEARS ON THIS SITE COMES FROM AMAZON SERVICES LLC. THIS CONTENT IS PROVIDED 'AS IS' AND IS SUBJECT TO CHANGE OR REMOVAL AT ANY TIME.

There's a story about an ancient queen who was searching for men to carry her litter as she traveled from place to place. Knowing that the job was about far more than the ability to hoist poles onto shoulders, the queen took prospective candidates to the edge of a cliff and asked only one question, "How close to this cliff's edge could you carry me?"

Some were so confident that they boldly replied, "Your majesty, I could get within six-inches of the cliff's edge." Others, however, were not so brash, stating that their royal charge was far too precious to even attempt flirting with the edge. As you can imagine, the wise queen chose men from the second group.

Today, Christians must understand that they carry a far more precious charge. They carry the charge to be like Christ and pursue holiness in a culture that mocks and misunderstands both. With that in mind, how can Christians spend any time thinking or discussing how close to the edge they can get with such precious things?

Christians are not to flirt with the line but rather protect the priceless treasure in their care. "The line has been drawn my friends. Now live above it."

In this soul-searching book:

Parenting the Difficult Child: A Biblica...

What The Bible Says About Parenting Bibl...

Parenting with Scripture: A Topical Guid...

The Christian Mama's Guide to Parenting ...