The Obedience of a Christian Man (Penguin Classics) 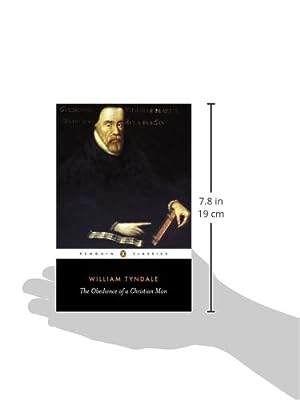 Price: 0.00
As of 2020-01-21 16:21:13 CST (more info)
Product prices and availability are accurate as of 2020-01-21 16:21:13 CST and are subject to change. Any price and availability information displayed on http://www.amazon.com/ at the time of purchase will apply to the purchase of this product.
Availability: Not Available - stock arriving soon
Product Information (more info)
0 0
CERTAIN CONTENT THAT APPEARS ON THIS SITE COMES FROM AMAZON SERVICES LLC. THIS CONTENT IS PROVIDED 'AS IS' AND IS SUBJECT TO CHANGE OR REMOVAL AT ANY TIME.

One of the key foundation books of the English Reformation, The Obedience of a Christian Man (1528) makes a radical challenge to the established order of the all-powerful Church of its time. Himself a priest, Tyndale boldly claims that there is just one social structure created by God to which all must be obedient, without the intervention of the rule of the Pope. He argues that Christians cannot be saved simply by performing ceremonies or by hearing the Scriptures in Latin, which most could not understand, and that all should have access to the Bible in their own language - an idea that was then both bold and dangerous. Powerful in thought and theological learning, this is a landmark in religious and political thinking.

The Obedience of a Christian Man by William Tyndale, a principal translator of the King James Bible, was published in 1528, three years after the first publication of his English translation of the New Testament. Obedience defends the basic goal of his translation, and of the English Reformation that he helped incite: opening direct access for all believers, even the "boy that driveth the plough" to Scripture, the supreme authority of the Church. For reformers such as Tyndale, obedience to Scripture was a revolutionary act requiring complete commitment. Tyndale described this commitment with forcefulness that still reads fresh today:

The book is a landmark of political thought, expounding another fundamental principle of the English Reformation: that the king is the supreme authority of the state. (Tyndale's ideal of royal authority, however, is determined by Scripture's authority: "The most despised person in his realm is the king's brother and fellow member with him and equal with him in the kingdom of God and Christ.") The Obedience of Christian Man includes much rhetoric about obedience of woman to man that now appears archaic and offensive, but its tough-minded description of the uneasy relationship between power and love is timeless. --Michael Joseph Gross

Man Up! Becoming a Godly Man in an Ungod...